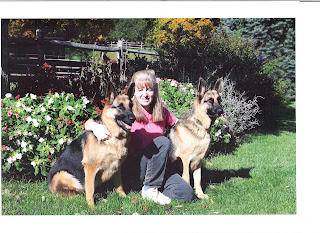 Posted by carolyn at 8:33 AM No comments:

Razz turns 4 years old today! this is her first winter since she turned one that she hasn't been recovering from knee surgery. she had her right CCL repaired 1/07 and the left in 8/07. she is doing very well, is a high drive dog and will probably never slow down. This is a picture Louisa took of us this summer, Razz on my right and Rock on my left. I can't wait to see green grass and flowers again!
Posted by carolyn at 8:28 AM No comments:

chris and I rode today, took advantage of our one day of January thaw this year, I think it was close to 40º! chris got 2 hours of sleep after working the night shift and I will work tonight, it was worth it. we haven't been able to do anything with the horses for at least 2 weeks due to the frigid temps and icy footing. couldn't even walk them out of my driveway. My plan for Seek is to ride him at the walk for 100 miles before really getting him going. i've been on him twice before, the first time he was very nervous, it was his first time in the woods, but he did great until we came to some ice, he didn't want to stop, I did, and he reared up. scared me unfortunately. I jumped off and led him a little and got back on and he was fine. he won't stand when being mounted and does little hops, but after circling him a few times he has figured out he needs to stand still if he wants to get moving again! the second time we rode I stayed on longer, we went up the main trail and he was a star, very very good. went over water, ice, rocks, ditches. Understandably today he was very revved up and spooky. Chris rode bareback, she is now the mad hacker and I am the paranoid wimp. I led seek up to mt pisquah in northboro, we went past tree cutters who politely turned off the chain saws and the usual a-hole drivers. there was a very scary mailbox that he has seen 20 times but today it was apparently transformed into a little bay horse eating monster. he was dancing around alot and biting me like crazy which he does when he's nervous. we got to the woods and there is no way I can lead him in the snow, too exhausting so I got on and off we went! he felt explosive but didn't misbehave, just power walked at 100 miles per hour and threw in a jig here and there. I saw a guy and his dog up ahead so being the brave and fearless horse trainer, I jumped off. his heart was pounding but he was fine passing them. I got back on and he stood like an angel for 2-3 seconds! off we went powerwalking, up a big hill that socks decided he needed to gallop up, so chris has walked, trotted and cantered bareback! seeker was good with him racing up behind. but when socks snorted he would spook, he was nervous and excited but good. then he lost it a little and started head swinging and throwing himself off balance which I hate since KC fell on me doing that. so again I got off (I'm older now and break easier) walked him a little and got back on and we rode the rest of the way out like he was a good old cow pony! so I figure I've ridden him 2 miles in 2 months - a world record! If we survive the "breaking in period" I really think he is going to be outstanding. he has a ton of energy, lovess to go out, seems pretty speedy, is very brave and has a good heart (physically and metaphorically!). he learns fast and really tries to do the right thing. Thanks Chris for putting up with me making a 5 mile ride last 2 hours!
Posted by carolyn at 2:32 PM 1 comment:

UGH! Socks twisted his shoe almost off the other night. This is usually a lameness sentence for him until we can get his shoe back on. He gets digital pulses and is all around miserable. Anywho, he walked in just fine and CB took off his shoe completely.
He stood on his bare foot without wincing!!!!! He even stood on it to paw with the shod foot! I also noticed that there is some concavity to his sole!!!! WOO HOO! Tim is coming out today to reshoe thank goodness but even last night, Socks walked in no problem and there were no pulses!
I'm really excited about his feet looking so good. I want to pick up with him where we left off in 2006 when he was ruined by that stupid farrier before Tim. He's so much fun to ride and is a big love. Now, if only I could post some pictures of before and after.........
Posted by Chris at 1:43 AM No comments: 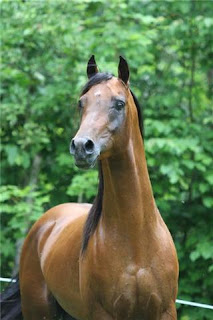 This is my new horse Seeqret, I have big dreams for him to be my 50 mile endurance horse!
Posted by carolyn at 5:14 PM 1 comment:

Welcome 2009!!!! 2008 was a bit lousy. Carolyn faced the fact that she had to "retire" Indy from endurance, I was still battling Socks' lamenesses after shoeing and Judy and Speedy had to leave us for warmer climates. =( All in all, we look forward to moving on and persevering.

On a lighter note, Long Run Farm got a new resident. Seeqret is a 4 year old bay Arab who has a great personality and plenty of spunk. He was recently gelded and had some problems with his recovery but with a few phone calls and e-mails from Lindsay (thank you!), the surgeon and Carolyn's vet Amy, he's doing well and is ready to learn the ropes!

As for the rest of the residents, they're doing fine. Socks has been doing great and hasn't been lame (knock on wood). Zak is, well, Zak. He's fat, fuzzy and has a 'tude. Indy has been doing well and is taking after good ole Uncle Zak because he's getting a little belly to match. Razz has been trying to keep everyone in line and Rocky keeps us smiling.
Posted by Chris at 10:37 PM No comments: